The 2018 U.S. midterm elections saw a dramatic increase in voter participation for younger generations. Here’s what brands and companies need to know about Millennial and Gen Z voter turnout to build consumer equity through the 2020 election and beyond.

We’re less than 100 days from the 2020 presidential election. Over the past weeks, we’ve heard many of our members ask what they can do to best activate on this major, and majorly controversial, occasion.  Our answer? Get out the vote.

Recent work by researchers at the Harvard Kennedy School reveals how leading brands have approached voter participation initiatives as part of a strategy for “meeting consumer expectations for engagement in social and political issues, raising brand awareness with new audiences, and increasing employee satisfaction.” In 2020, Gen Z and Millennial consumers will be at the heart of this strategy.

It has long been the conventional wisdom that younger Americans are less likely to vote than retirees who have fewer pressures on their time. But if you take a closer look at the data, a different story emerges – younger consumers value voting more than older generations did at their age.

Just look at voter participation rates. Comparing turnout in the first midterm and presidential elections for Gen X (1990 and 1988), Millennials (2006 and 2004), and Gen Z (2018 and predicted for 2020), we see a clear upward trend. While only 23 percent of eligible Gen X and Millennial consumers voted in their first midterms, 30 percent of Gen Z did. And Collage Group research estimates that at least 59 percent of eligible Gen Z consumers will cast their ballots in 2020, a significant majority compared to previous generations. But the generational gap persists, which offers an opportunity for brands to step in and make a tangible difference. Only a slim majority of Millennials (51%) voted in the 2016 presidential election, with even fewer voting in 2018 (42%). What does this all mean for brands and companies? If you want younger consumers to recognize your efforts in promoting social causes, voting must be top of mind. There are plenty of organizations you can partner with and support to accomplish this goal, including:

As part of either these strategic partnerships or your own campaigns, you need to be able to communicate effectively with youth consumers on the issues that matter to them. Out of the box thinking is needed to connect with potential voters who have not already been convinced by the existing messages thrown their way, and brands can take the lead in pushing for such innovation.

Election results are rolling in as we go to print, but in all likelihood you are reading this in the wake of the historic midterm election results. Our stock in trade is Multicultural, Gen Z and Millennial research, but in this post we take a Total Market view to anticipate the election results, with a focus on white ethnocentrism.

The appeal to that segment could not be more clear. Donald Trump continued to reinforce the threat of immigration right up until the last day of campaigning for the midterms, a message he’s been perpetuating since the very inception of his campaign for president. Despite increasing polarization, it’s undeniable that Trump’s fan base is steadfast in their support of him. Loyal to the “make America great again” slogan, the president’s supporters are typically understood to be older voters who hail from white, rural, small-town America.  As if to confirm this exact scenario, the president has spent most of his time campaigning away from urban cores, strongholds of the Democrats.

Data from our recent America in 2018 research, however contradict prevalent assumption that white people in urban areas (which we defined as counties with populations greater than 50,000 and with 90% or more living in high density urban environments) are less likely to respond Trump’s anti-immigrant rhetoric. Yet again, the prevailing assumptions about  Trump’s fan base may not hold water.

In our study we asked, “to what degree are you concerned about the loss of majority status for European Americans?” We asked survey participants to rank their answer on a 5-point scale, where 5 indicated highest concern and categorized respondents as “ethnocentric” if they answer 4 or 5.  Of the 1421 survey respondents identifying as white, 22% were “ethnocentric” using this measure.

No surprise: ethnocentricity in Gen Z is uniformly low. 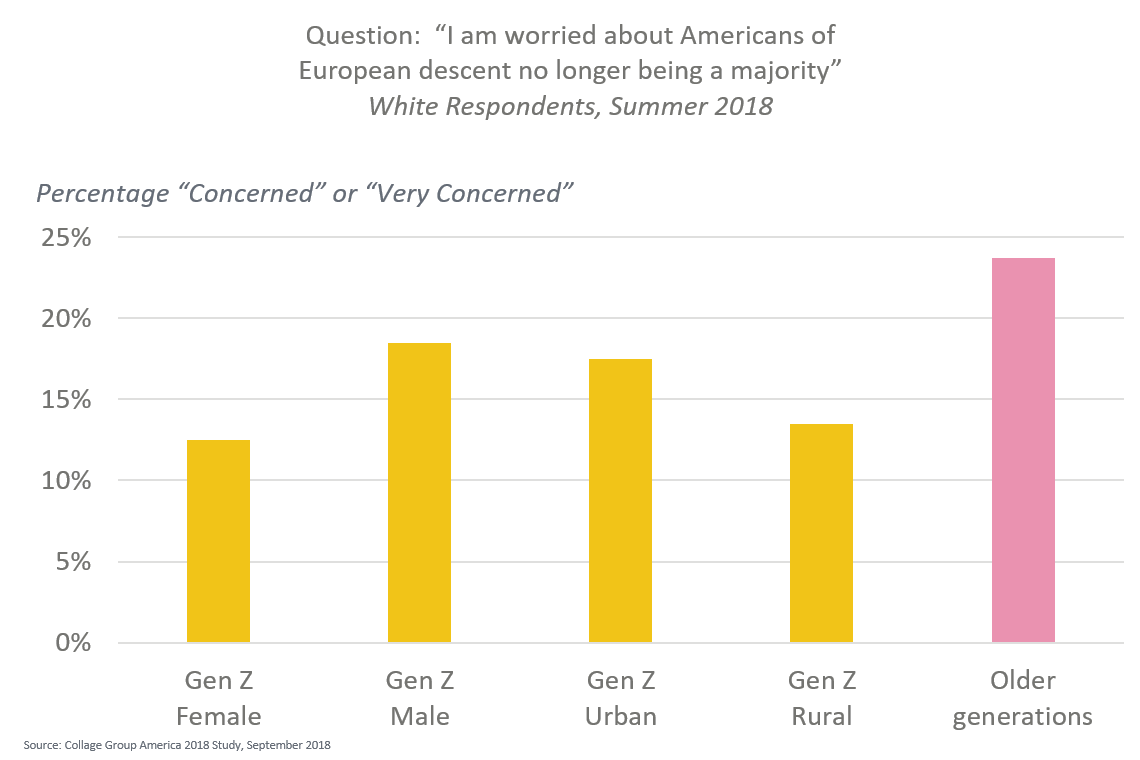 Aging and urbanicity are strongly correlated with ethnocentricity. 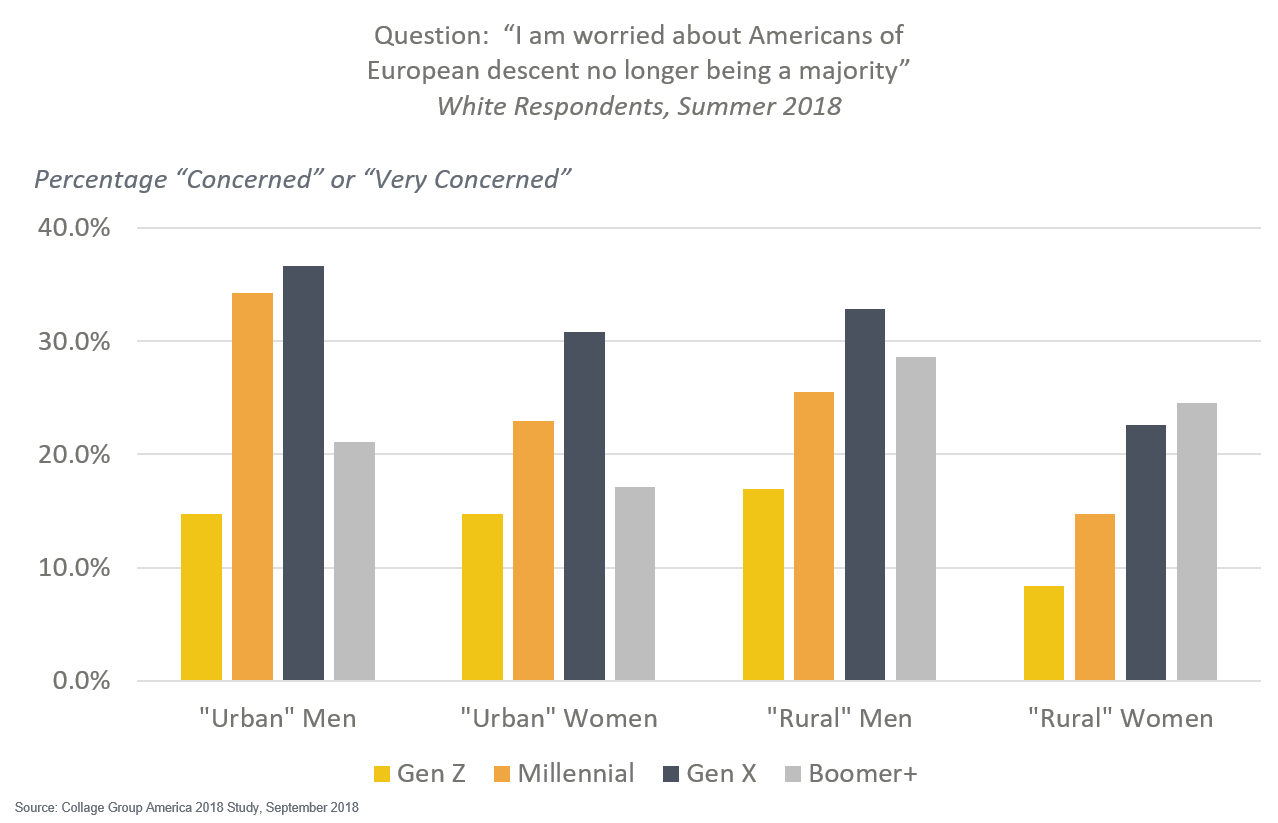 Older Millennial and Gen X males living in urban areas are the most concerned about losing majority status. 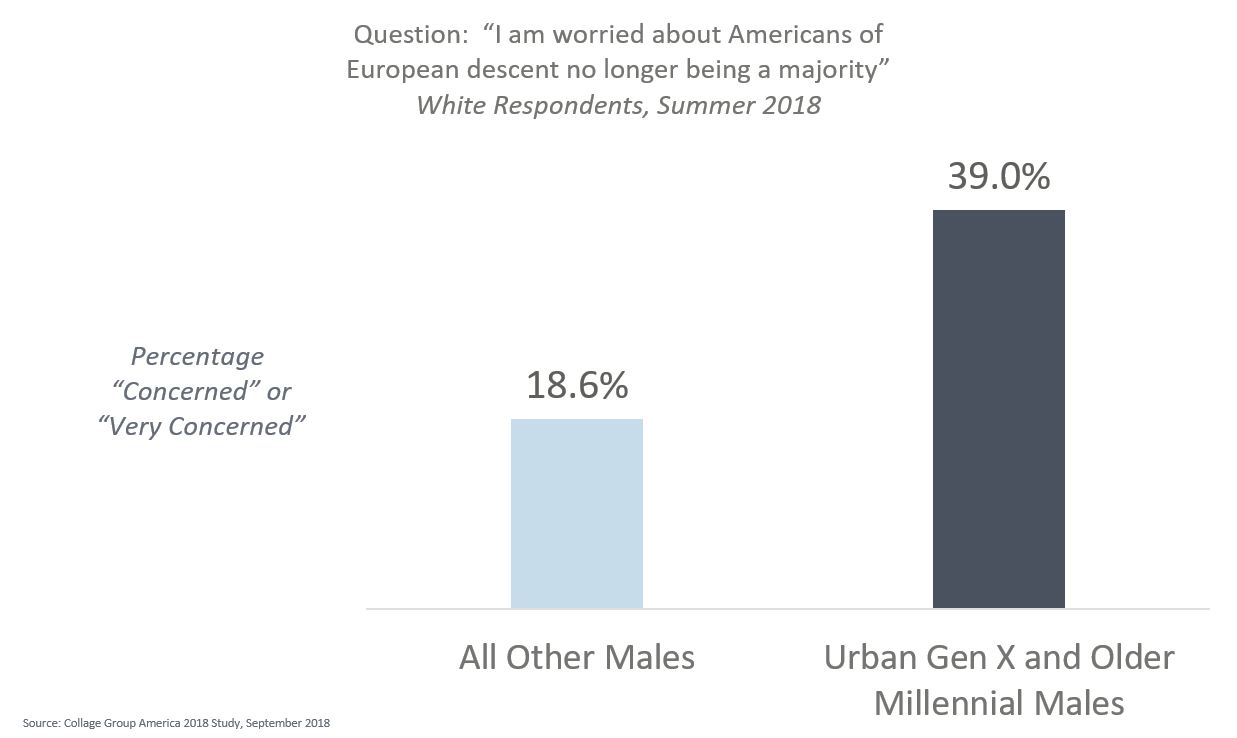 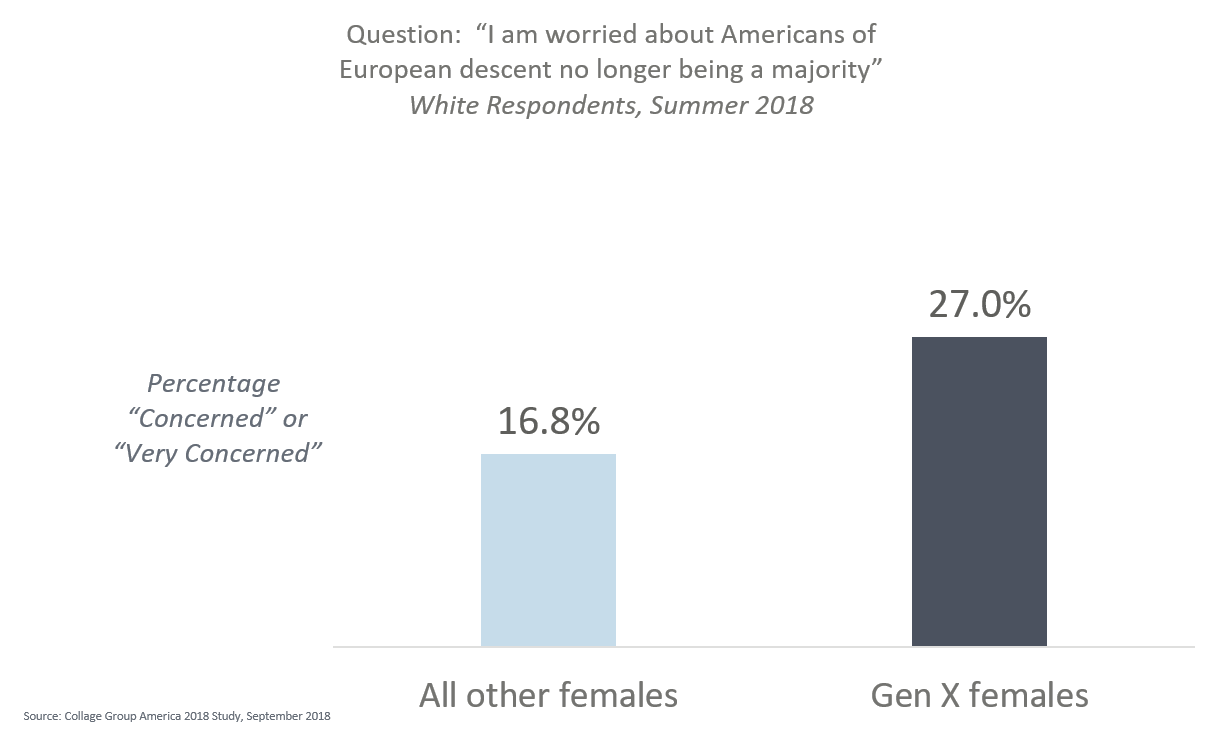 Recent academic research confirms that exposure to diversity in urban environments can increase ethnocentricity among whites. In this Harvard study, researchers focused on attitudinal changes towards immigration by analyzing the reactions of white commuter rail riders after seeing Mexican immigrants at their train platform. The data shows that initially, people responded negatively to outsiders. While those negative feelings were ultimately reduced during the course of the study, they never completely subsided. This confirms the theory that urbanicity doesn’t necessarily make you more open to a diverse population, even if it means being at the center of a multicultural and vibrant melting pot.

As we go to print we don’t yet know whether the results in key swing districts in urban areas will reveal that white individuals voted in favor of Trump’s anti-immigrant agenda, or that they voted to break with that appeal to instinct. For marketers, the challenge could not be more clear, that the increase in polarization across the media creates major opportunities to appeal to a diverse consumer base even as it increases the risk of backlash.  In this climate, Collage Group provides the tools marketers need to navigate the Total Market through the turbulence of consumer sentiment and behavior.

Black Americans represent a unique, influential audience who are projected to contribute to 16% of population growth through 2025 and skew slightly younger than the general U.S. population.

As brands across every category recognize the importance of engaging and supporting Black Americans, do you know the right cultural nuance and tone to establish resonance and connection?

Join us to accelerate your journey to Cultural Fluency, learn how your brand can amplify and support Black voices, and celebrate Black History Month.