Our post-Superbowl survey on the halftime show found that Hispanic, Black, and White consumers in the “New Wave” (ages 18-39) are receptive to Hispanic culture and messaging. This data further supports our claim that brands can win across this segment with a multicultural message.

Learn how these insights can be applied to your brand. 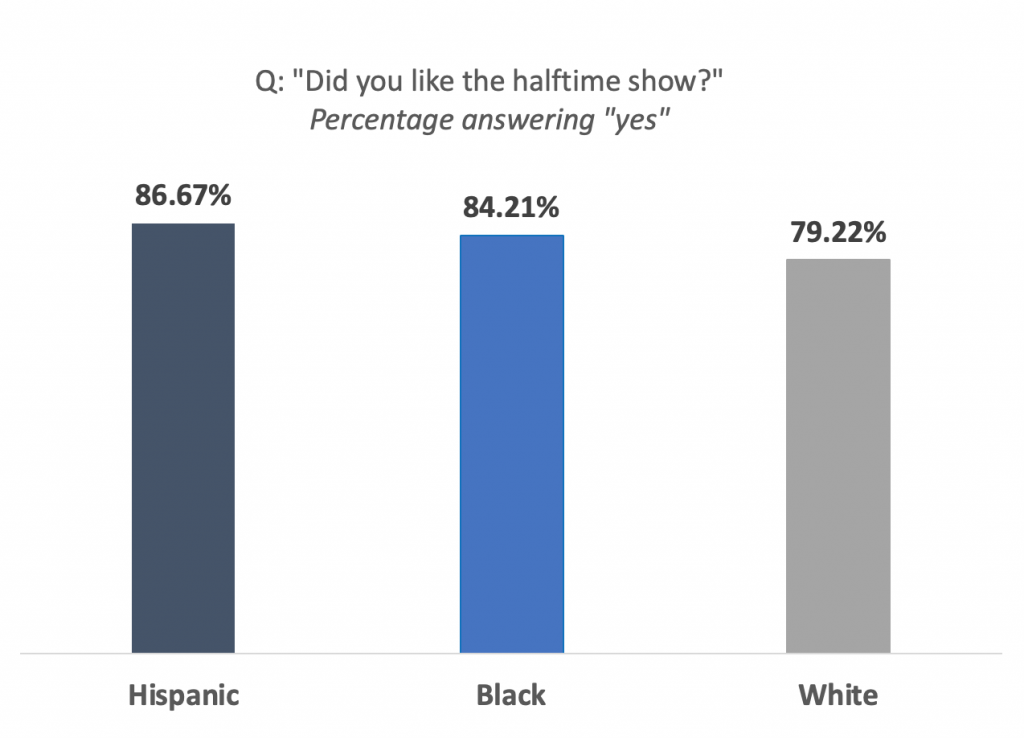 “I don’t know what [NFL commissioner] Goodell was thinking,” confided a colleague after reflecting on the Superbowl LIV halftime extravaganza featuring Jennifer Lopez and Shakira. “Frankly, I’m shocked he signed off on that thing.”

Google “super bowl halftime controversy 2020” and you’ll get over six million results.  It seems a lot of people shared my friend’s view that Roger Goodell’s decision to feature the Latina superstars was suspect. But many more would likely champion the decision based on the massive positive press around JLo’s celebration of Puerto Rico, Shakira’s nod to her middle eastern heritage, and of course the spike in both artists’ record sales and online streams.

But anecdotal evidence only provides limited insight. To really understand what consumers thought about this culturally charged event, brands need data. So, we fielded a survey to 284 Hispanic, Black, and White consumers age 18-39.  We call this segment the “New Wave,” defined by an experience of growing up in an intrinsically diverse America. The findings from this survey and what they mean for brands are below.

First, and most importantly, the New Wave was exceptionally positive about the halftime show. In fact, almost 80% or more of each segment said they enjoyed the show.

When asked what they liked most, respondents repeatedly mentioned Latinas and Latin culture, as you see in the quotes below.  If Goodell’s intent was to ensure the NFL’s relevance to the 25 million Hispanic NFL fans who are part of America’s fastest growing demographic, then his decision to celebrate Hispanic culture and its growing influence on America was a no-brainer. Our data indicate that the vast majority of the New Wave—18-39 year old Americans—did not find the show particularly controversial and were thrilled about the inclusion of superstar Latinas. This finding is further evidence that brands looking to take the next big step in marketing, which is to lead with multicultural, will be well-positioned to win with the New Wave. Your brand should follow the evidence and lean into the multicultural space to ensure you capture your share of this segment’s attention and loyalty.

Diverse Representation in Ads Is Not Enough to Win The “New Wave” of Diverse,...

Mom Knows Best: Understanding the Key Decision-Makers of the Family, with Special...