Over the past week, we at Collage Group have been posting analyses of pre-released Super Bowl LIII ads. We put a curated selection of 16 ads through our AdRate analytics process, employing a nationally-representative sample of American consumers.

Note that the Net score is not a simple subtraction of Backlash from Groundswell – it adjusts these scores based on the size of the “viewer pools” Groundswell and Backlash are based on.

You can find our play-by-play of Coke and Pepsi’s spots here, and a 21+ deep dive into alcoholic beverage ads here.

Of the 16 ads we tested, five are in the category of “snack foods.” Here you can see the Total Market rankings for this category (n=1029): 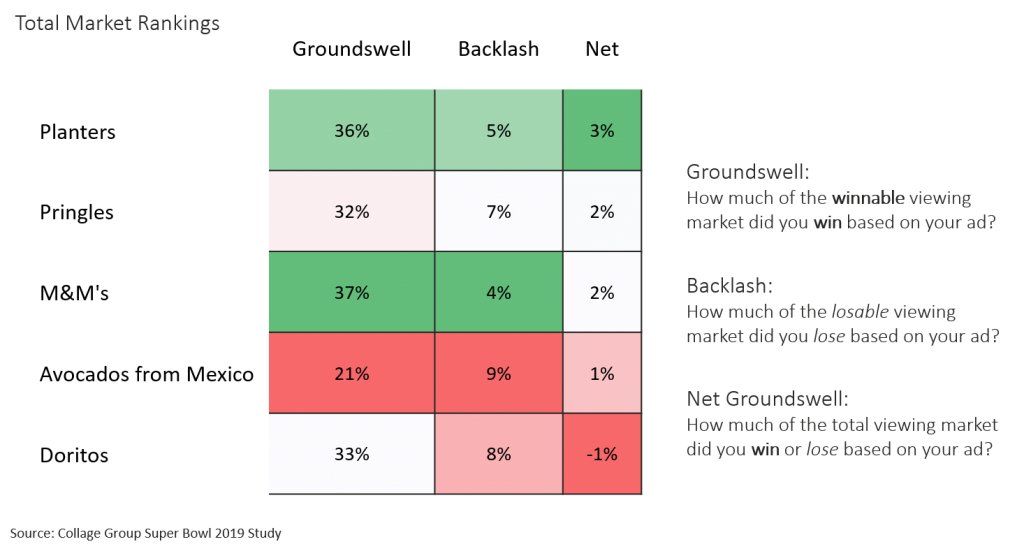 If you’ve read our previous Super Bowl LIII installments, you’ll notice that these Net scores are clustered at the low end of the distribution for the 16 ads. Why? People tend to feel positive about snack ads to begin with, so snack food brands have the most to lose in terms of changing hearts, minds, and stomachs. And as we’ll see, the ads were polarized along generational lines, so there’s some reason to take these numbers with a grain of salt. We’ll go into that variation next, but overall Planters was the narrow winner for this highly competitive category. Doritos, on the other hand, was the only brand we tested that saw a negative Net score.

As already hinted, there’s only so much a Total Market perspective can tell you. The following charts rank these five ads across our four generational segments in terms of Groundswell and Backlash. You can find an analysis of these ads’ Groundswell drivers in the attached files. 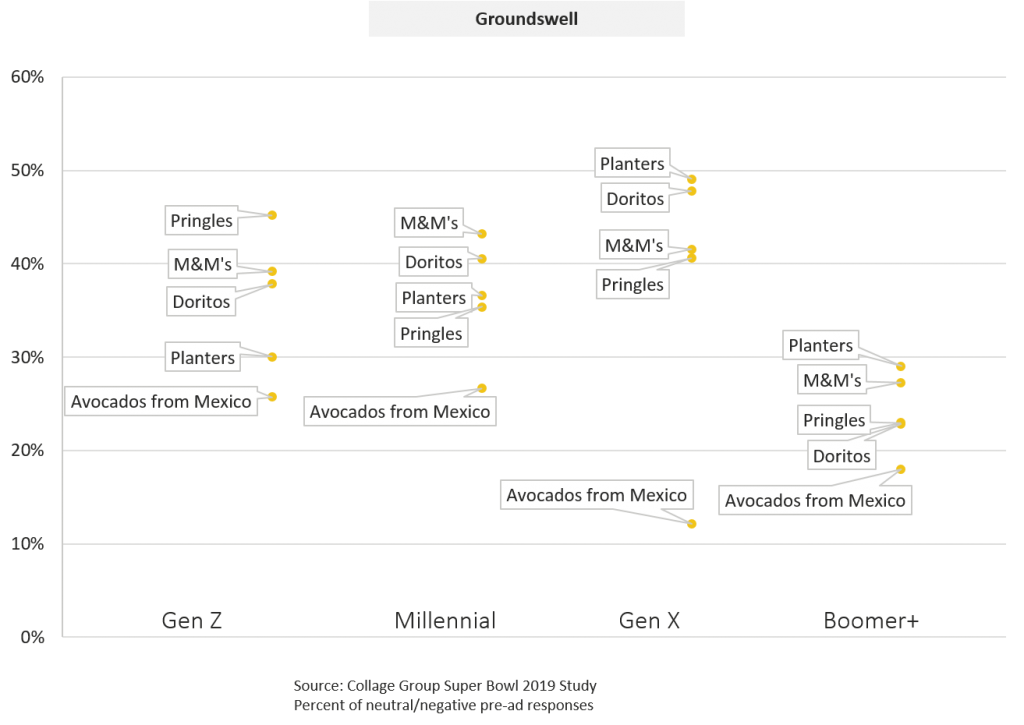 So which ads won with Gen Z and Millennials? Pringles achieved the highest Gen Z groundswell, making use of the dry and absurd humor that previous Collage research has identified works well for these youngest of consumers. Here’s the ad, for reference:

For older consumers, Planters scored the highest Groundswell, which explains why the brand ended up on top for the Total Market. 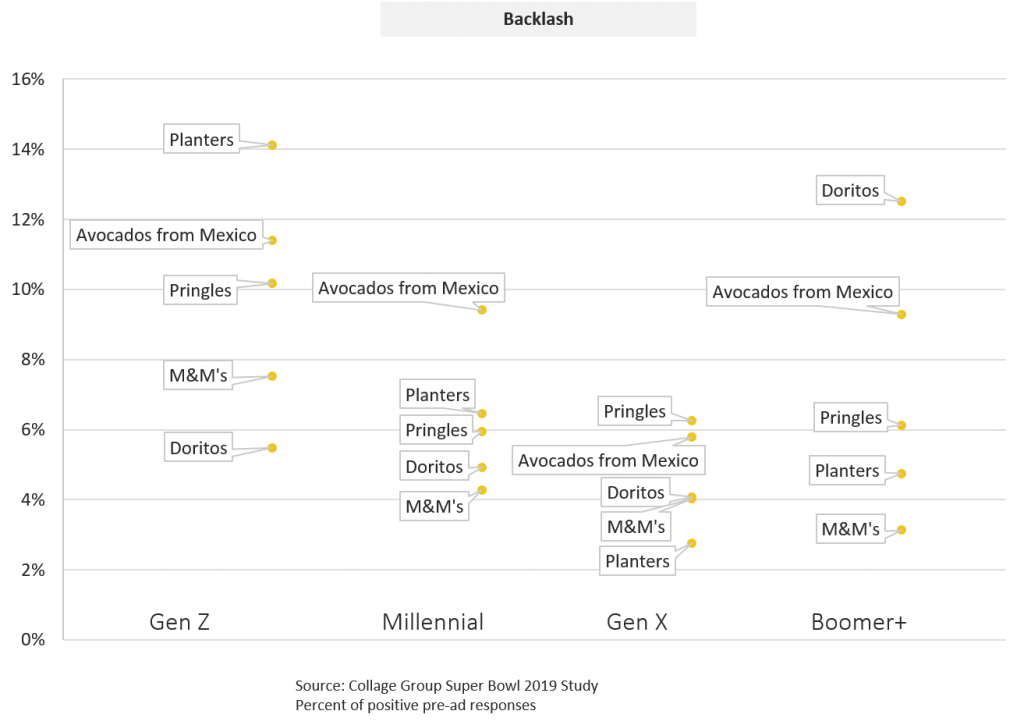 In terms of Backlash, we see that the youngest and oldest consumers are most critical of ads, with Planters earning the most Gen Z scorn and Doritos drawing the ire of the most Boomer+ respondents. There was a lot going on in both ads, so let’s dig deeper:

Honey I’m still free, take a Chance on me

Speaking of hot… stuff, Doritos pulled the Backstreet Boys back from memory lane to appear alongside Chance the Rapper in this colorful spot. This wasn’t the only rap-filled ad this year, with Expensify and 2 Chainz actually releasing a full music video. Doritos & Mountain Dew together scored big in 2018 by crossing two fan bases – those of Morgan Freeman and Peter Dinklage – and this year the brand hoped it could make the magic happen again.

So how did these two celebrity & car-filled ads do across generations? Let’s see what AdRate can tell us. 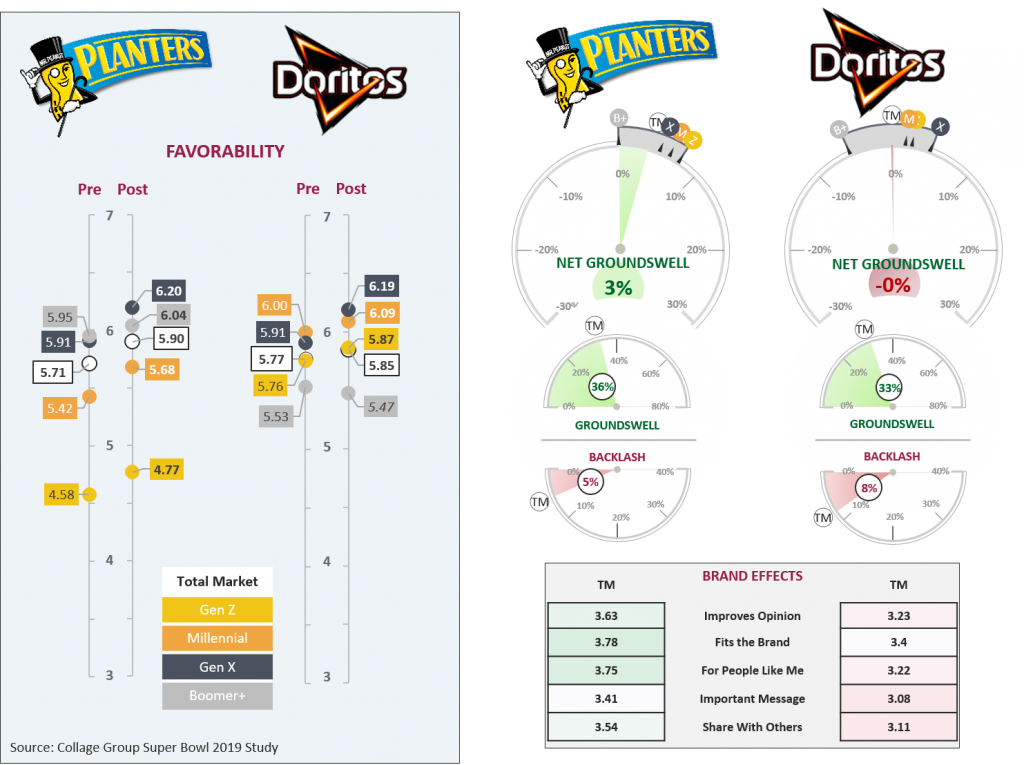 There’s a lot to soak in here. Starting on the left, you see that Planters had a lot of room to improve with Gen Z, and it did somewhat, but that largest overall increase in Favorability was for Gen X. Gen X also had the largest bump for Doritos – both ads featured celebrities (A-Rod, Charlie Sheen, and the Backstreet Boys) that these 39-53 year-old viewers could really appreciate.

Moving to the right, you see that Gen X had the highest Net for the Doritos ad, but it was Gen Z at the lead for Planters. Remember, this metric accounts for the “room to improve” for each segment – with Gen Z the least favorable for Planters beforehand, there was the highest opportunity for growth. For both ads, lagging Boomer+ responses held down the overall score.

But if you’re just interested in Millennial vs. Gen Z, keep reading.

Foundational AdRate research, as well as our recent analysis of Stella Artois’ Super Bowl ad, show the importance of the “shock factor” for driving ad performance. Here, we see that Gen Z had much greater high-valence, high-arousal responses – in other words, they were entertained – than did Millennials, which led to better aggregate performance despite high backlash for the youngest viewers. 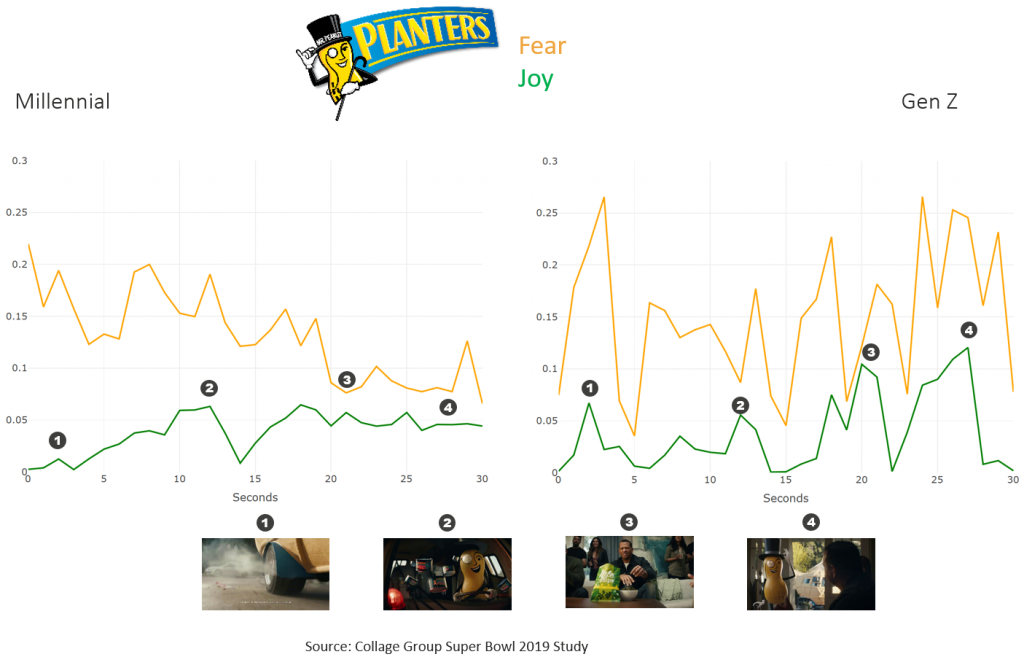 Here we see Joy (green) and Fear (yellow) for the two generations. From the moment the nut-mobile hit the scene (1), Gen Z had more visceral reactions with higher spikes in Joy and Fear. Both generations appreciated the first slo-mo moment (2), but the kale chips joke (3) was more appreciated by Gen Z. And that final “thumbs up” (4) sealed the deal for Gen Z in a way that went unappreciated by Millennials.

But did the celebrities have any impact for young consumers? Not really. Charlie Sheen’s appearance at around 15 seconds saw a dip in both Joy and Fear for both generations. And for A-Rod it was the situational humor, not the celebrity himself, which drew reactions here. Other data we have supports this: 26% of Gen X said that “casting” was the best ad feature, while only 14% of Gen Z and 18% of Millennials agreed. The lesson here is that if you’re trying to achieve cross-generational appeal, have one generation’s influencers doing something that another generation will appreciate even if they don’t even recognize them as influencers.

To put it shortly, make sure your ads have more A-Rod than Charlie Sheen when appealing to genYZ.

Doritos: too hot for Millennials, too (c)old for Gen Z, and not quite right for either

It’s well established in our research that music is a passion point for younger consumers, but that means an ad’s auditory choices can be very polarizing (e.g. Michelob’s attempt at ASMR for Millennials). Doritos’ Net score was low for both Millennials and Gen Z, so we wanted to see if there were polarized responses to the music involved in the brand’s spot. 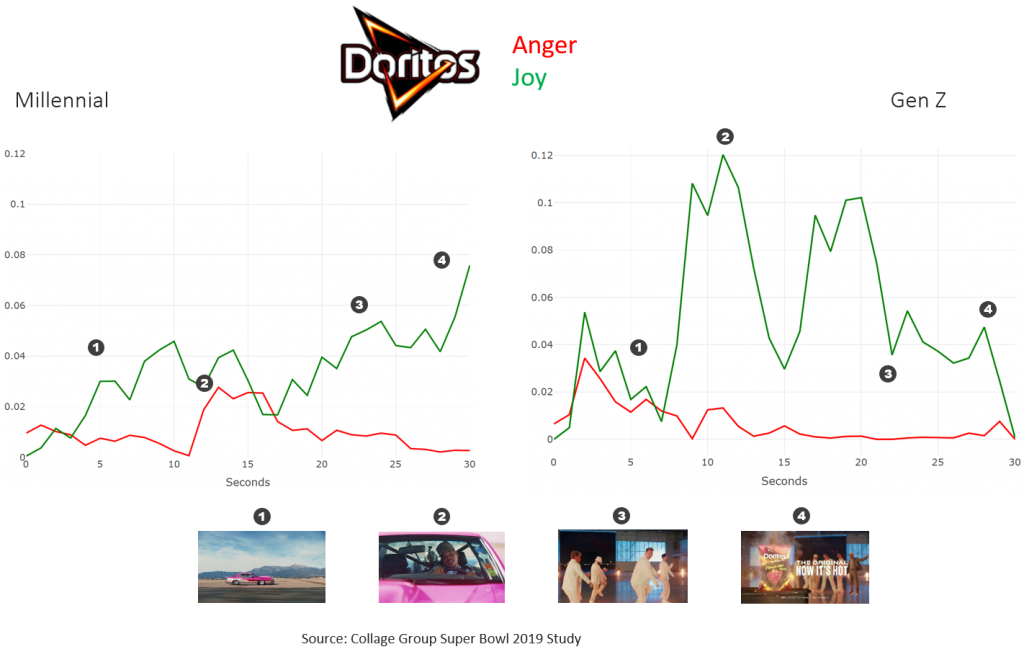 This time, the important emotions across the two generations were Joy (green) and Anger (red). As you can see, Gen Z appreciated Chance the Rapper, with a massive spike in Joy when the rapping got in full swing (2). Millennials, on the other hand, only saw their Joy rise when the visuals got interesting (1), and actually responded with Anger towards the youthful rapper (2). Millennial Joy only took off when the Backstreet Boys took the stage (3), which lasted through the final branding moment (4). Gen Z, on the other hand, saw no such lasting response to the teen idols of yesteryear.

Based on the data, it’s clear why this year’s Doritos ad pales in comparison to their 2018 success. With Morgan Freeman and Peter Dinklage, there was considerable overlap between the two actors’ fan bases. For Chance and the Backstreet Boys, though, that middle ground is much smaller. Hitting that “intersectional authenticity” between both one community and another  (a concept covered in our America in 2018 research) is much stronger than appealing to either one community or another.

In brief, Doritos bit off more than its viewers could chew.

If you’re interested in more information about these ads, the other ads we’ve tested, or the AdRate product in general, please contact Ryan Woods: 240.380.3075